Tell people that you are gong to Colombia and their first reactions don’t tend to be “Wow, what a beautiful country” but “Are you crazy? It’s full of drugs and guns and when will your funeral be?”

Tell people that you are going to Medellin and that reaction just becomes more extreme. Let’s face it, any city that produces the answer “cartel” ninety nine times out of a hundred in a word association game has a significant image problem.

But reputations aren’t reality and Medellin’s reputation, although changing, is still based on the situation in the city that is now twenty years old.

My journey from Manizales to Medellin highlighted the more realistic risks of travelling in Colombia. The truth is that you are far more likely to be hospitalised by the traffic than the traffickers over here.

The trip left me fairly frazzled, but safe and well by the end of the journey.

From Manizales to Medellin

The bus from Manizales was a large 50 seater coach, quite plush and with only about a half of the seats sold. As we pulled off I looked around and thought that I was in for a comfortable journey.

It was certainly spectacular. Making our way through the coffee region we travelled through mountainous countryside, climbing up the sides of valleys and crossing high mountain passes.

The driving was both optimistic and enthusiastic, to put it politely. Our driver was keen to maintain his speed on the twisty, mountain roads and that meant taking a hopeful approach at many points. Overtaking was undertaken at all possible opportunities and the preferred line at corners was a racing one.

Nevertheless, I had been more relaxed that on my previous journey. Maybe I had got used to slightly hairy bus journeys by now and anyway there is a limit to how long any of us can squeeze our sphincters. This changed about two thirds of the way as the driver was whizzing us around another tight corner, where the road switchbacked from downhill to uphill.

There then followed three quarters of an hour of vigorous discussion between the two drivers. From his gestures and remonstrations it seemed clear that the motorcyclist hadn’t sustained any significant injuries, which was a relief.

Getting to the hotel

Arriving at Medellin’s Terminal del Sur bus station, an hour late and somewhat frazzled, I trundled my suitcase through its companion shopping mall while a cool and relaxing breeze flowed through the open concourse. It was a brief respite before my ongoing journey to the hotel.

My first impressions of my driver were positive. He smiled, got out of the taxi and helped me with my bags. Then, as I was still getting into the car, he lurched off into the rush hour traffic.

Medellin taxis have three gears, “accelerate”, “judder” and “a bit less judder”, although third gear is only used in extreme circumstances. So, we hared off into the road and pulled round the island, making use of as many of its lanes as possible, before joining a long line of cars pushing themselves out onto the dual carriageway out of town.

At this point we saw our first accident. A motorcyclist was picking his bike out of a bush while a taxi driver shrugged.

We juddered past and made our way towards a junction.

When we got to the junction there were a couple of drivers looking at the relative damage to their cars. Everybody else leant on their horns while offering their opinions about how much of an idiot each of them was.

We juddered past and made our way towards the dual carriageway.

Now, the only way of making your way onto the dual carriageway out of Medellin is brute force. In traffic of any sort a Paisa will attempt to bring their bumper to within 2 centimeters of the car in front and keep it there. Looking to see if there is a gap (there will most definitely not be a gap) is a sign of weakness and you will sit waiting for ever. 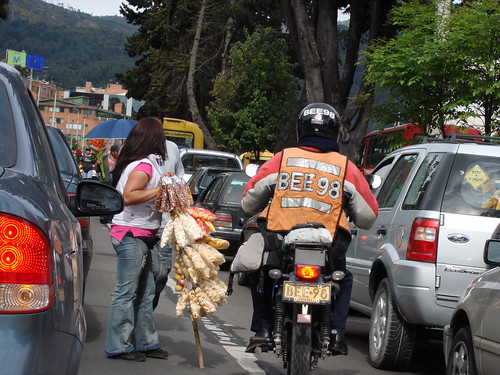 So, we waited our turn and then inched into the first lane and juddered along for the next half a mile before having to force ourselves into the middle lane when the car in front drove into the back of the car in front of it.

By this point my frazzle had most definitely returned. I was tired and rather out of sorts and the hurly burly of the traffic was making me nervous. Motorcycles sped around the cars, finding spaces in the chaos and switching lanes in front and behind us.

I was pretty much waiting for our accident to happen.

Finally, we veered in front of a small van and braked hard before moving off the dual carriageway on to the relative peace of the road that leads up to Poblado and my hotel.

At this pont my driver needed clarification of where we were going. With some pride I showed him the map on my phone and pointed to the hotel and its address. He looked at me like I was an idiot. What kind of a fool uses a map to find somewhere, after all? Certainly not a Colombian taxi driver it seems.

After taking a circuitous route that nearly had us on the local golf course we made it to the hotel. I paid the driver and dropped him a tip. He gave me his card and said he could drive me anywhere in Medellin during my stay.

I smiled in a very polite and British fashion.

My taxi driver disappeared around the corner and I swear I heard a crunch, but I was already mentally sinking into the soft mattress of the hotel room that awaited me.