My home for a week in Ibarra was “La Finca Sommerwind”, a camping and cabins set up next to the Laguna de Yahuarcocha a couple of miles outside town. It is beautiful and largely peaceful, except for when there are motorbikes racing around the racetrack that is directly opposite.

Still, this was really only for a few hours at the weekend. During the week the busiest it gets is with people walking, jogging and cycling around it. Also, the view from the cabin of the volcanoes across the lake more than made up for this slight annoyance.

It was also quite high up, at a little over 2,200 metres. This means that the temperature fluctuated a lot more than it ever did when I was living in Palmira. It can be very hot when the sun is out but the temperature drops when it is overcast and it can even be quite cold at night. After a year spent sleeping with a fan pointing directly at me, this was a luxury.

The finca attracts a lot of “Overlanders”. These are people who like to go offroading, up mountains and generally wherever they can push their slightly bonkers looking vehicles. I didn’t take any photos of the ones on site, but the photo below, from Wikipedia, gives a good idea of what they are like. 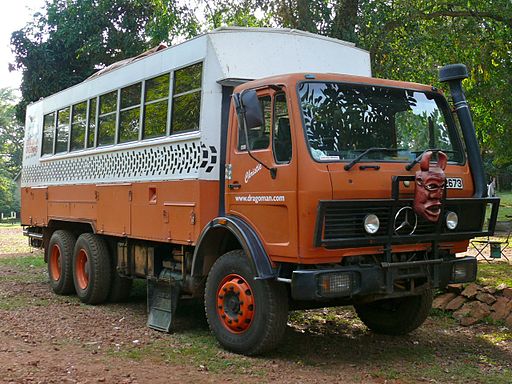 Most of the vehicles are modified in some way. One night an Italian family pulled up in a HGV looking a little bit like the one above, but with a caravan welded on the back.

Nobody batted an eyelid.

This was considered quite reasonable behaviour.

The city of Ibarra itself has a lovely old colonial centre with cobbled streets. It is also the first place I’ve stopped where there is a large presence of indigenous people. A lot of women have long, plaited, black hair that comes down from behind their felt hats and they have multicoloured wraparounds that go over their skirts.

Walking through the city streets I saw quite a few street vendors of the local delicacy, helados de paila – homemade ice cream. My first sighting was of a woman walking along the pavement with what looked like an upturned mould of ice cream in a silver bowl perched on her head. The ice cream was brightly coloured in oranges, reds and yellows and completed by a half dozen cones arranged mohican style along its peaks.

But, what I loved most about my week in Ibarra was the space and the fresh air on Finca Summerkind. My cabin was in such a beautiful, peaceful setting. After the quite hectic week leading up to leaving all my friends in Palmira and then a three day trek across southern Colombia it was the ideal place to relax and recuperate.

I realised that I was carrying quite a lot more clothes than was easy to carry and so I gave some to Fernando, the gardener. He took them to his church, where he goes daily after work, for distribution. A lovely man, he has called me a few times since I left to see how I am getting on and if I need any help with my travels.