While we were in Merida we decided to hire a car and drive the Ruta Puuc, which was immediately, and quite undeservedly, rechristened The Puke Route. We were fortunate as Montejo Car Hire were just 100 meters from our front door and we were able to hire a small saloon at 400 pesos (less than £20) for the day. I’d bought an International Driving Permit from the post office before we left, but they were utterly unconcerned about seeing it.

When we went to pick up the car I was relieved to see that it had been well worn in. The car hire fella made an attempt at noting the biggest of the bumps and scratches, but it was obvious that unless we came back missing a door or having driven into another vehicle, we weren’t going to get stung for any extra charges. Best of all, it had air-con.

Having inched tentatively out of the narrow driveway in the automatic – I’d not driven a car without a gear stick before – we headed south out of the city towards Muna. We turned left and headed for our first stop – the caves at Loltun. We had to go through Tikul on the way and we got a bit lost due to it being market day, the road being diverted and us not being that used to the roads yet. It seems that a grid system is great for navigating around a place, but not so good if you want to actually leave it. We had a number of attempts at escaping Tikul before we found the road out (and not a dead end on the edge of the countryside).

The caves at Loltun are quite spectacular and the guided tour explained the geology of the place its history and symbolic meaning to Mayan people. The Mayans used the cave system to hide during the Caste War during the last half of the Nineteenth Century. but the caves have been in use for at least 10,000 years. There are black hand paintings on the wall and the bones of cats, deer and even mammoths have been found in them.

My favourite part of the tour was standing in the cave, looking up at a sinkhole above us with shafts of light coming down and birds flying around the entrance. There was something quite supranatural about it.

After the caves we continued on our way, going clockwise around the Ruta Puuc. Once you are on it (and not going round in circles in Tikul) it is very easy to follow, although we did overshoot a site or two due to some haphazard signposting at the sites themselves. We took a fairly lazy approach to the afternoon and walked around the relatively empty sites at Labna and X’lapak, especially enjoying the jungle walk around the latter.

Our casual approach to the route meant that we had to skip Sayil and Kabah in an attempt to get to the largest of the sites at Uxmal before it closed. We failed, and the ticket office was closing just as we tipped up. 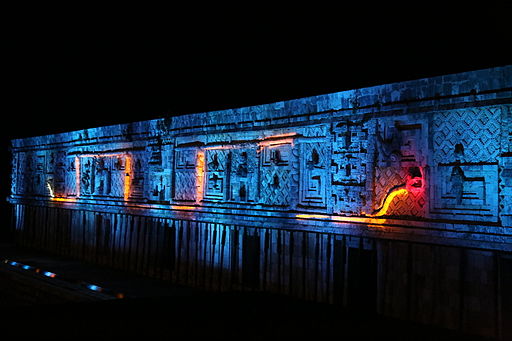 Fortunately for us, there is a sound at light show after dark and so we hung around, ate at the cafe, had a nap on the grass and went in to see the show in the evening. This meant that we didn’t get to see anything like the whole site, but that we did walk in past the Pyramid of the Magician, after which we climbed up onto the viewing platform on The Quadrangle of the Nuns, where three lines of chairs had been set out for us.

The show started just after sunset. The ruins were lit up while a voiceover told the story (all in Spanish) of a fair maiden who fell in love with a Mayan prince. She sang, they danced and they fell in love, but the course of their love wasn’t to run smoothly. That year something happened to anger the gods and the crops were threatened, but thanks to Supergran and the bass player from the Stone Roses a resolution was achieved.

Thoroughly enjoyable, and a slight provocation to go to a Spanish language school soon, as our understanding of the show may not have been in complete concord with the actual story.